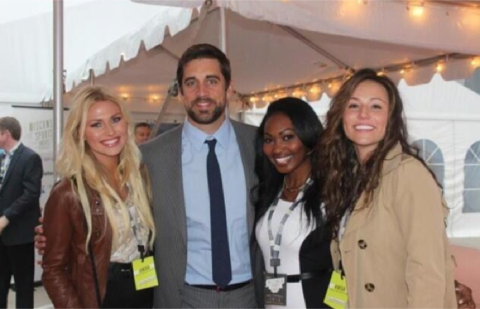 Apparently, last week was interview Aaron Rodgers week. The Journal Sentinel did a long-form Q&A with the Green Bay Packers quarterback and then — not to be outdone — the Press Gazette followed with their own.

“I think some people forget sometimes I do have to go to the grocery store, I do enjoy going out to dinner, I have to get my oil changed from time to time,” Rodgers said. “I do all the normal things. I cut my grass. People kind of forget that normal part that we do a lot of the stuff that everybody else does but we all have our talents, and mine is in football.”

Where does Rodgers grocery shop? Piggly Wiggly, yo!

“I think being recognized more is something you have to get used to, whether it’s here or in California or when I’m traveling. It’s more a part of my life. People recognize me from my play or a commercial I’ve done. It’s just a normal part of life now. I think it helps being in Green Bay where it’s more of a first-name-basis type of a feel. People are happy to see you but, it’s kind of, I guess it’s more normal for them than maybe in a big city where you never expect to see somebody and when you do see someone, maybe they go a little bit crazier than here. The people know I’m going to be down at the Piggly Wiggly or at Chives or at another place I like to go to. That’s just, they’re expecting almost to see me there.”

Should you stalk him at these places? No, you should not.

“I don’t ever feel like I have to always be “on.” However, some people when they see you, there’s an expectation that ‘oh there’s the quarterback, I’ve got to go talk to him about football or this or that, or get an autograph or picture.’ I try and be as courteous as possible and sometimes try to tell these fans that as much as I appreciate their support, there are times where I need to be able to have an uninterrupted dinner or not have to take a bunch of pictures or just be able to do some of the normal things.”

So what did we learn here?

1. Normal guy. 2. Piggly Wiggly and Chives for stalking. 3. Stalk from a creepy distance and do not interrupt dinner.

We recommend leering out from behind a plant.