Aaron Rodgers is Sixth-Best Player, According to Peers 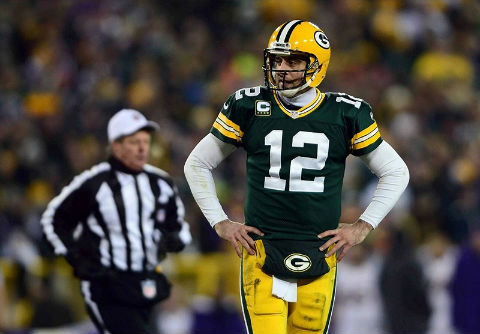 The list is voted on by NFL players. Rodgers finished first on the same list last year, so his drop will probably piss him off and he’ll make it a point to tear it up this season.

Adrian Peterson finished at the top of the list, followed by Peyton Manning, Calvin Johnson, Tom Brady and J.J. Watt.

Clearly, there are arguments to be made for all of those guys to be above Rodgers, but really, most people would agree that Rodgers is the best player in the NFL.

The reason for Rodgers’ drop has to be because most of these guys just looked at the 2012 season. Rodgers’ performance dipped slightly from his MVP 2011 season. Meanwhile, Peterson was rushing for over 2,000 yards, Manning had the Broncos looking like the best team in the NFL until the playoffs, Johnson nearly reached 2,000 yards receiving, Brady is Brady and Watt was the defensive player of the year.

It probably also didn’t help that the Packers lost in the divisional round of the playoffs for the second year in a row.

Clay Matthews came in at No. 31 on the list. Charles Woodson was No. 85 and Randall Cobb and Jordy Nelson were among a bunch of players who got votes at the bottom of the list.

You can see the whole glorious list if you go here.