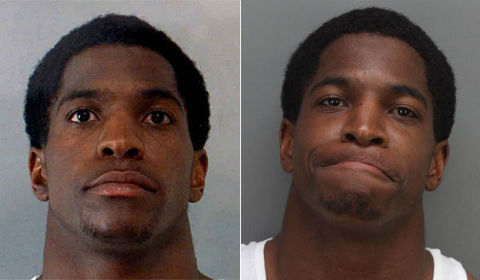 You remember Titus Young. The former Detroit Lions receiver was suspended for purposefully sabotaging plays, whined about not getting the ball enough, had Sr. on the back of his jersey, punched one of his own teammates, basically tweeted his way to his release, and is just a basic all-around doucher.

Well, Titus is being Titus again. This turd was arrested twice in the span of 24 hours on Sunday. A sane person might wonder how the hell that’s possible. An insane person like Young could tell you.

What you see above are both of Young’s mugshots from that day. Because you get one taken each time you get arrested, apparently. It’s not like, “Oh, we’ve already got your mugshot on file from earlier today, so we don’t need to take another one.”

Really, the only bad thing about this story is that Young is no longer on the Lions and therefore we can’t add this to their 2013 league-leading arrest total. Actually, they lead the league in arrests since the beginning of 2012. You know, they like those high character guys over there in Detroit.

Want another great Titus moment? Deadspin has the story about how he took a nap in an AT&T store once after they refused to give him everything for free.

This guy clearly has it figured out.

Oh, and did we mention he’s still the cover boy for the official 2013 Detroit Lions calendar? Good work Detroit. You should get yourself one of those.

Broncos Passed on Eddie Lacy Because of the Toe