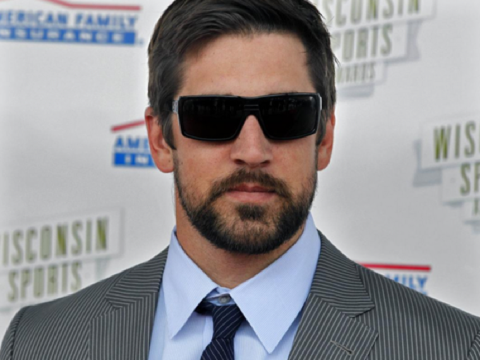 Sir Aaron Rodgers. If he were British then that would be a possibility, but he’s not. Still, teammates are calling the Green Bay Packers quarterback “sir.”

Rookie running back Eddie Lacy is apparently among those star struck by the $110 million man.

“My first impression was more of a fan’s reaction,” Lacy told USA TODAY Sports. “I’m in the huddle with him, and I’m thinking, ‘This is Aaron Rodgers.'”

Rodgers, as you might expect, isn’t so keen on the designation.

“That gives you a good perspective on how things can change,” Rodgers said. “Getting called ‘sir’ by some of these young guys is kind of silly, too. I’m not even 30 yet. Let’s relax on the ‘sir’ part, OK? But I appreciate the respect.”

And then you know where this story goes.

Look how different things are for Rodgers now! He slid down to the bottom of the first round in 2005! Oh how much has changed! Same old tired fucking story that will be recycled by lazy-ass journalists until Rodgers dies.

Hell, if Lacy becomes a top-flight running back, these same asshats will be writing about how he slipped to the second round over and over again.

But for now, they’ll just write about how he calls Rodgers ‘sir.’