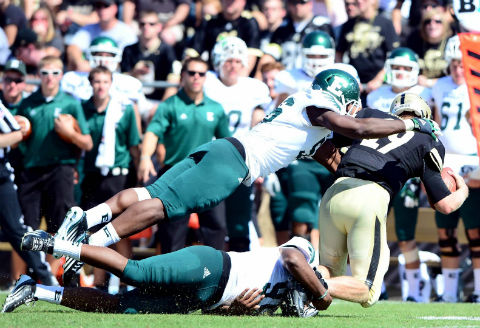 Andy Mulumba has a pro football future somewhere. The Eastern Michigan defensive end, who was signed as an undrafted free agent by the Green Bay Packers, was the second overall pick in the CFL draft by the Winnipeg Blue Bombers.

Despite that lofty status draft status, the Montreal native plans on trying to make the Packers. If he doesn’t, he’ll head to the CFL.

“I already signed a contract with the Green Bay Packers. I want to try that first and we’ll go from there.”

By using the second pick on Mulumba, the Bombers are essentially saying they don’t believe he has a chance to make the Packers. They may be right.

Mulumba is a tweener at 6-3, 260, which means he could have to move from defensive end to outside linebacker in the NFL. The problem with that is, he’s never been known as a pass rusher. Couple that with the fact that he didn’t play against top-level competition in college and it seems like a long shot that Mulumba sticks in Green Bay.

That being said, similar odds are beaten by guys like this every year in Green Bay. Frank Zombo made the team in 2010 as an unheralded undrafted free agent from Central Michigan and stuck around for three years.

One thing the Blue Bombers just told us is they think Mulumba has the tools to be a good pass rusher. From what we hear, the running game is pretty much non-existent in the CFL, so they didn’t draft this guy that high because of his run-stuffing ability.

Previous Article
Aaron Rodgers is on Forbes’ Most Influential List
Next Article
Packers Throwback Uniforms Are Back: Your Need to Know