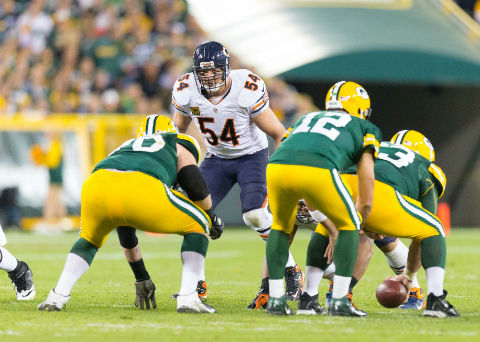 Linebacker Brian Urlacher retired from the Chicago Bears this week — not the Green Bay Packers, as NESN would have you believe — and that brought out the well wishers. It turns out, both Brett Favre and Aaron Rodgers love them some Brian Urlacher.

Congratulations @BUrlacher54 on your retirement. You were one of the fiercest players I ever stood across the line of scrimmage from.

Rodgers went next, telling Jim Rome Urlacher was his favorite player to play against.

“I just have the utmost amount of respect for him, the way he plays the game,” Rodgers told Rome on Wednesday. “A lot of memories come to mind. He picked me off a couple times, maybe more than anybody else has. But I had one really bad play in the NFC Championship [after the] 2010 season and was able to somehow grab his knee/thigh area enough to trip him up for a tackle [and prevent a touchdown]. One of my favorite memories going against Brian.

“But the thing I loved about going against Brian was the conversation between plays, between series, during TV timeouts. I just have a ton of respect for him and wish him nothing but the best. I’ll miss him out there.”

Don Majkowski? Well, he didn’t play against Urlacher, so he didn’t have anything to say. He did have some bad things to say about Freddie Joe Nunn, though.