by Shawn
in Uncategorized
36 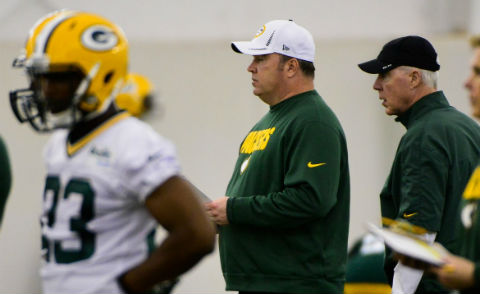 This week the Green Bay Packers began what Mike McCarthy calls Phase II of the offseason program. This phase represents a shift away from the weight room and position drills to full on 7-on-7 and 11-on-11 practices that closely mirror those that will occur in training camp.

In fact, some reporters present at Tuesday’s camp, which was open to the public, suggested that the OTA had a training camp feel to it with the physicality perhaps crossing the line of what is allowed by the new CBA.

Whether the physicality this early in the program represents a designed philosophical change or merely was the result of heightened competition by a roster that will once again be one of the youngest in the league, now purged of veterans Charles Woodson, Donald Driver and Greg Jennings, is an interesting question.

McCarthy has publicly stated that his offseason programs needed a new approach, and he has consistently sworn to explore every available theory to reduce the seasonal march to IR that has plagued his teams.

The Packers offseasons during McCarthy’s tenure have been known for being Easy Street, basically. The lack of contact was prophetic of the very changes the newest CBA would force all teams to embrace. It is conceivable that McCarthy has decided that the absence of hitting during the OTAs has actually made the Packers more vulnerable to injury once the real hitting starts.

It is also possible that McCarthy does accept the notion that the Packers are too “soft” and that the more physical OTA sets the tone for what is going to be a tougher training camp.

Regardless, the intensity and physicality on display on Tuesday was a surprise to many who have grown accustomed to past OTAs.

The Tuesday practice even saw the first fight of the offseason, with Brad Jones and Jermichael Finley coming to disagreement.

If we consider this OTA to indeed be a tone or table-setter for training camp, then there are other things we saw that might interest Packers Nation.

Sam Shields is a no show. Not a huge surprise since he has not accepted the tender offered to him. Casey Hayward and Tramon Williams started on the outside, and Shields better show up sooner rather than later or that duo is likely to be the starters in Week 1.

Marshall Newhouse started at right tackle with Don Barclay working on the second team. Andrew Datko worked as a back up at right guard while Greg Van Roten worked specifically as the second-team center.

The Killa, Datone Jones, made a quick impression with repeated showings in the Packers backfield. That is great for the defense, but not such great news for the player allegedly responsible for blocking Jones, Bryan Bulaga. It was anticipated that facing Clay Matthews in practice would help initiate Bulaga at left tackle, but apparently, Bulaga had his difficulties handling the rookie let alone the All-Pro.

Much as they did at the end of the season, M.D. Jennings and Jerron McMillian took turns opposite Morgan Burnett at safety. We can only hope this gets sorted out and doesn’t result in a safety-by-committee situation.

Besides Shields, the only other player on the roster to not attend this “voluntary” OTA was Johnny Jolly, who says he will be around next week. Thanks for the warning.

There, but not participating for a variety of reasons, were Desmond Bishop, Davon House, Derek Sherrod and Dezman Moses. The first three are apparently still getting over their injuries, while Moses was sidelined with a condition that he refused to discuss. Maybe its personally embarrassing or a matter of national security.

Even though the injury to J.C. Tretter is the biggest news so far from these OTAs, that injury happened during a basic fumble drill, showing that indeed an injury can happen while simply “walking your doggie.”

It apparently hasn’t discouraged the coaching staff from a more physical approach to Phase II. We will see if any other injuries change that, or if the shift in intensity changes the physicality of the team when it really counts.

Charles Woodson Signed with the Raiders