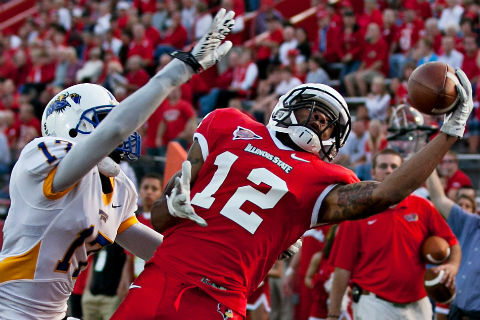 The Green Bay Packers have signed five guys they had in for tryouts during their rookie camp over the weekend.

Normally, we’d call these guys camp bodies and most, if not all of them, will probably be just that, but receiver Jarrett Boykin made his way onto the team as a tryout player last season. So, yes, I’m saying there’s a chance!

Here’s a look at the five new Packers.

Fullback Jonathan Amosa — Washington
Amosa (5-11, 233) played in every game for the Huskies in 2012 as their No. 1 fullback, but he hardly touched the ball in his career. He’s a former walk-on who earned a scholarship for his junior and senior seasons. He did block for a 1,400-plus yard rusher his senior season.

Cornerback Brandon Smith — Arizona State
Smith (6-2, 202) actually played wide receiver in college, catching a total of 10 passes for 196 yards. Also interesting, is he last played college ball in 2010. Smith spent time with Carolina and Seattle during the 2011 preseason, but was unable to stick as a receiver. So the Packers are going to experiment with Smith as a corner.

Receiver Tyrone Walker — Illinois State
Walker (5-11, 200) finished his college career as as the Redbirds all-time leader in receptions (250), receiving yards (3,565) and receiving touchdowns (32). The FCS All-American had 90 catches for 1,319 yards as a senior. The Packers suddenly have an Illinois State fetish. They’ve now drafted or signed four guys from that school this year.