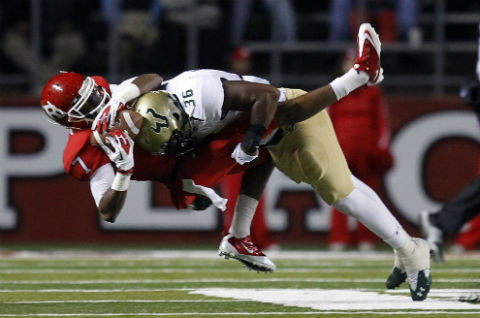 We joked about it during the draft, specifically when the Green Bay Packers selected cornerback Micah Hyde in the fifth round. Now the Packers have more or less confirmed, they don’t really care if a player has an arrest on his record anymore.

Hyde was arrested for public intoxication last year. The joke being he’ll fit right in in Green Bay.

Sam Barrington, one of the Packers seventh-round choices, was also arrested. Four times, in fact. His problems stem from unpaid parking tickets.

So it’s not like these guys are hardened criminals or anything. You could make the case that Barrington is more of an idiot than he is a criminal. You’d think he’d have paid those tickets after the first time he was arrested.

Images of Torrance Marshall are dancing in my head, but that’s beside the point.

This is somewhat of a change in direction for an organization that constantly tosses around the term Packer people.

“We go through all that and we try to sort out the things that are something of a problem and other things that are maybe more like a college kid stubbing their toe,” Packers general manager Ted Thompson said.

“Things can happen,” Thompson said. “We do like for our guys to be of a certain character and that sort of thing, and we try our best to make sure that’s the case. We look through a lot of different records and a lot of different things leading up to the draft. That’s been going on since last May.”

You could make the argument that the Packers don’t have the luxury of being so selective anymore. They’re no longer the class of the NFC from a talent standpoint and since they refuse to use free agency, they need to acquire all of their players through the draft.

So it’s clearly time to overlook hiccups like this.