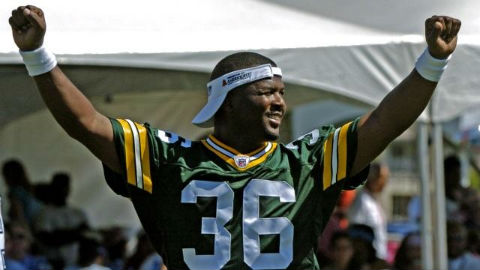 The homophobes have outed themselves! Unless you’ve been living under a rock, you’ve probably heard NBA player Jason Collins came out this week. Well, some of the small-minded among us don’t think too much of that and former Green Bay Packers safety LeRoy Butler found that out on Tuesday.

Butler had a speaking engagement scheduled at a church and after he tweeted his support for Collins, it got canceled. Why? Because human rights and respect should not be extended to people who put their penis in the wrong place and that place will forever be defined by a book written a long time ago.

First, here’s the fairly innocuous tweet that started this off.

Then, here’s Butler’s rundown of the events that followed.

These stipulations make me laugh. Say 10 Hail Mary’s too. That will erase the way you really feel. Anyway, cheers to LeRoy for doing the right thing.

Of course, because, OH MY FUCKING GOD, WHAT IF MY KID IS GAY!?! I FEAR THINGS THAT ARE FOREIGN TO ME!

And then here’s the part I love most.

So apparently it’s okay to be a hateful prick, so long as no one knows who you are. LeRoy is right. The name of the church doesn’t matter. That place would have been besieged with calls, reporters, protesters and so forth had Butler stated the name publicly. In a grand stroke of irony, they’re thanking someone for showing compassion, which is exactly what they’re unable to hand out.

Listen, maybe if you pray on it enough then one day all of the gay people in the world will just disappear. Until then, just keep being the hateful bigots you are.