Here’s Aaron Rodgers on The Office 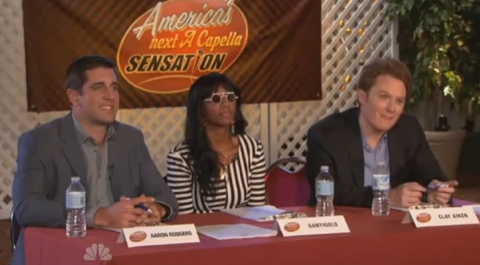 For some reason, I just heard Marv Albert yelling, “A spectacular move!” No, this isn’t quite that, but it is Green Bay Packers quarterback Aaron Rodgers making a cameo on ‘The Office.’

That show’s still on, huh? Apparently.

Rodgers played a judge on a fictional singing show that Ed Helms’ character tries to audition for (and predictably, fails). Why is Rodgers a judge for a singing show along with Santigold and Clay Aiken — two people who are actually, you know, music artists? Not important!

If you’ve seen the State Farm commercials where Rodgers “acts,” then you’ve pretty much seen this.

But here it is anyway. Probably superior to Brett Favre‘s appearance in ‘There’s Something About Mary,’ though.

Previous Article
Charles Woodson Will Now Play for Anyone
Next Article
Let’s Not Forget, the Minnesota Vikings Are a Joke!