Lester Bagley is the Minnesota Vikings executive who’s been leading the charge for a new stadium. After years of incompetence, he was finally able to do said job and boy is he happy about it. So happy, in fact, that he’s trash talking Green Bay Packers fans.

Bagley was interviewed by some local imbecile and at the end of the interview, the local imbecile showed him a Photoshop of the new Hormel Chili Dome on top of a sandcrawler from Star Wars. He stated that the photo came from a Green Bay Packers blog, which set Bagley on his trash-talking spree.

“Our very first regular season game will likely be against the Green Bay Packers. It will be good to see Adrian Peterson break loose, score the first touchdown in the new stadium and run over Clay Matthews on his way to the end zone. We’ll see. Hopefully we’ll have the last word in August of 2016.”

Bagley went on to mention how the Vikings played at Green Bay when the Packers opened the new Lambeau Field and the Vikings won, saying, “It’s one to zero for the Vikings in new stadiums.”

Derrrrrrrrrr! Bagley did not mention where the Vikings would be putting their trophy case in the Hormel Chili Dome because, well, they don’t have one.

But here’s the questionable part of this whole thing. The sandcrawler photo didn’t appear on any Packers blog to my knowledge. I found it on KSK, which is sometimes populated by the drivel of noted Vikings fan Drew Magary.

Regardless of who writes for the site, it sure as hell isn’t a Packers blog.

Obviously, our constant Hormel Chili references are way over the heads of these chili-stained assholes. 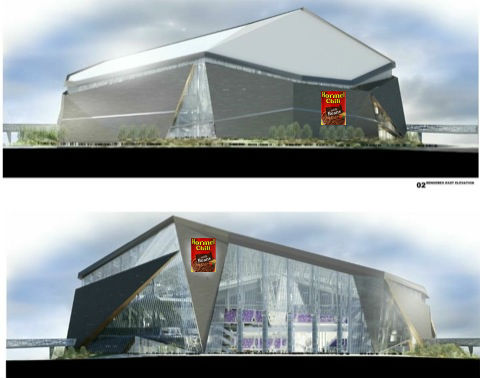