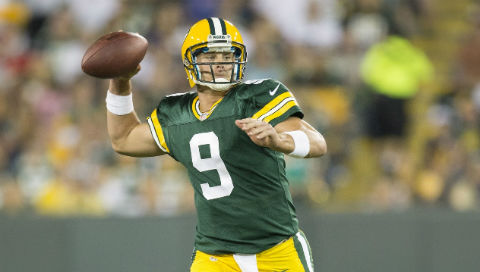 The Green Bay Packers could have a new backup quarterback this season. After going one season with Graham Harrell in that role, the Packers are expecting second-year player B.J. Coleman to push for the job as Aaron Rodgers‘ caddy.

Coleman spent all of 2012 on the practice squad after being selected in the seventh round, but early reports indicate Coleman has made considerable strides entering his second season. Coleman participated in the team’s rookie camp over the weekend.

“What I had to see from B.J. (in this minicamp) is him (having) looked like he’d been here for a year, be in charge of the drills and be productive,” coach Mike McCarthy said Sunday after the final minicamp practice. “And that was evident in all three practices.

“Now there’s a couple things that he’ll learn from. Actually, (Sunday) afternoon (I was talking to) B.J. coming off the field about a particular play in the final team period. So he’s got ability. There’s just some things that he’s done in the past and the way he’s played the position that are total opposite of the way he’s being taught, so we got to get that part figured out. But I think he’s definitely making a lot of progress.”

That could be bad news for Harrell, who hasn’t exactly made anyone forget about Matt Flynn. Harrell fumbled away a scoring opportunity in his only regular-season action in 2012.

Coleman, meanwhile, has a much stronger arm than Harrell and appears to be more athletic. His biggest problem in his rookie season was not being familiar with the offense.

That’s not the case anymore. That could mean the end of Harrell’s stint with the Packers.