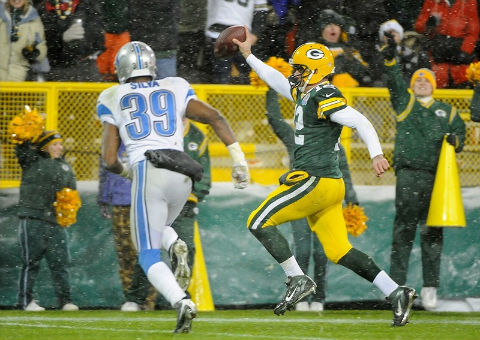 Green Bay Packers quarterback Aaron Rodgers is influential, or so we’re told. Rodgers came in at No. 8 on Forbes’ list of most influential athletes.

The $110 million man came in just ahead of NBA MVP LeBron James. He was preceded on the list by three other quarterbacks, although it’s hard to call one of these guys a quarterback.

That guy, Tim Tebow, who’s probably done as an NFL signal caller, was No. 1 on the list thanks to all of his churchy goodness. Peyton Manning and Drew Brees came in at No. 5 and 6, respectively.

The list was compiled based on surveys from Nielsen and E-Poll Market Research. Rodgers’ scores were as follows — Influential: 19%, Awareness: 27%, N-Score: 133.

N-Score is Neilsen’s measurement endorsement potential. We really have no idea what the other percentages mean.