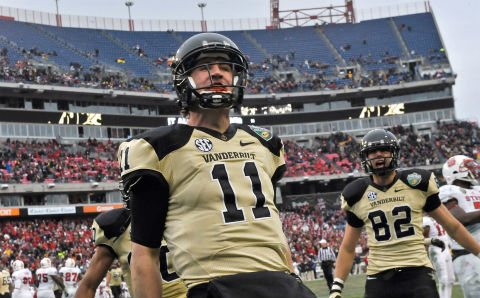 Awkward! That’s what that would have been. Jordan Rodgers, the younger brother of Green Bay Packers quarterback Aaron Rodgers, was almost a member of the Detroit Lions.

The younger Rodgers went undrafted and ended up signing with the Jacksonville Jaguars, but word out of The D is it came down to them and the Leos.

Ultimately, the opportunity to go up a couple of suckbags like Blaine Gabbert and Chad Henne in Jacksonville turned out to be more appealing than being Matthew Stafford‘s caddy.

“Hey Jordan, fetch me a jelly donut and my ball cap so I can put it on backwards, brah!” That’s what Butterball would have told Jordan Rodgers on a daily basis. You know, when he wasn’t busy licking chicken grease off his fingers.

“(The Jaguars) provide one of the better opportunities you can ask for as a free-agent quarterback. There’s only two on the roster, and most teams have three or maybe four. It just leaves a lot of opportunity for guys like me to get my foot in the door,” Jordan said.

Yeah, and both those guys suck, like we mentioned. Blaine… his name is Blaine. He’ll be wearing a Polo and giving old ladies tennis lessons at the Jacksonville Country Club by this time next year.

That’s not to suggest Jordan is going to start, although the Jaguars probably have a similar talent level to Vanderbilt, where Rodgers played in college.

The good thing to know is this, though. Jordan has the old Rodgers’ chip on his shoulder and it’s a good thing THAT story will never die. Jordan wasn’t invited to the scouting combine, so…

“I’ve carried my chip with me my entire career,” Jordan told Fox Sports Wisconsin. “I’ve had to fight and claw for every position I’ve had. I sat on the bench as a junior in high school, I had to compete my senior year in high school to get the job, I competed again at Vanderbilt before having success. Just carrying that and factoring in the Combine; I deserved to be there.

“This is the path I’ve taken my whole career. I’m not angry, it’s just more motivation to want to succeed.”

This guy will probably be starting in a year or two. Kurt Warner was undrafted and he started, so obviously that happens all the time!

Previous Article
Packers Throwback Uniforms Are Back: Your Need to Know
Next Article
Broncos Passed on Eddie Lacy Because of the Toe