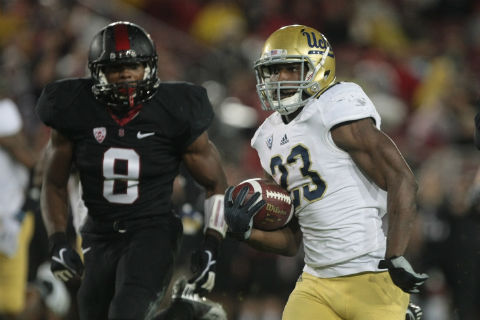 The Green Bay Packers traded back into the fourth round — their third pick of the round — to select UCLA running back Johnathan Franklin.

Apparently, they’re serious about improving their running game. The Packers picked Alabama running back Eddie Lacy in the second round, as well.

The 5-10, 205-pound Franklin pretty simply tore it up in 2012, when he ran for 1,734 yards and 12 touchdowns. Franklin also averaged just over eight yards per carry. He’s fast and he can make guys miss. Frankly, we were surprised he was still available in round four and we were more surprised the Packers picked him, considering they chose Lacy yesterday.

Franklin will need to add some muscle to hold up in the NFL. He also needs to get better in the passing game and as a blocker, but he has all the tools to be a dynamic player.

The #Packers have made it known James Starks is on the trading block. No surprise. They've already drafted 2 RBs.

Don’t see many takers on that one.

Here are some highlights.