by Monty McMahon
in Uncategorized
58 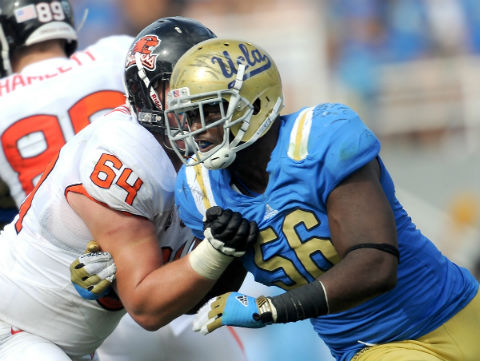 Was this the best-available pick Ted Thompson always pays lip service to, but never picks? With their first pick in the 2013 NFL Draft, the Green Bay Packers selected UCLA defensive end Datone Jones.

Jones is 6-3, 283 and it sounds like he’ll be expected to step in at defensive end for Green Bay. C.J. Wilson, move over.

The defensive line was a weakness for the Packers in 2012, even though they drafted two defensive linemen in the first four rounds last season. In that regard, this pick doesn’t come as much of a surprise. The Packers kicked the tires on a couple free agent defensive linemen and they also brought back Johnny Jolly, who’s been out of football for three years.

Jones can play both inside and out. In his senior season, he registered 57 tackles, including 17.5 for a loss and six sacks. This guy will be expected to get after the quarterback and help the Packers contain that read-option shit.

The downside with Jones is, he’s not the prototypical 3-4 defensive end in that he’s a little on the small side.

At the combine, Jones ran a 4.8 40, had 29 reps in the bench press, registered 31.5 in the vertical jump and 112 in the broad jump. That last number was only two inches better than the worst performance by a defensive end. Of course, his 4.32 in the 20-yard shuttle was one of the best performances, for whatever that’s worth.

You want highlights, here they are.

D.J. Smith was Not Out of Work For Long

Here’s What We Learned About Datone Jones From the Packers

Here's What We Learned About Datone Jones From the Packers