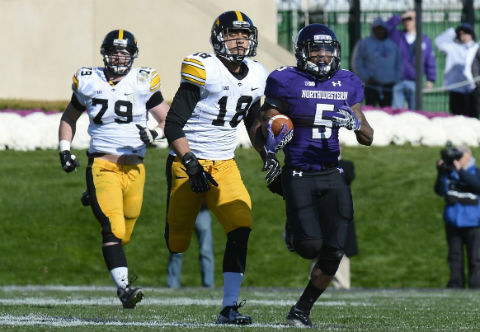 The Green Bay Packers took Iowa cornerback Micah Hyde with their fifth-round pick at No. 159.

Do the Packers need a cornerback? Nope, but this was clearly a value pick.

The good — he’s a ball hawk and a solid tackler with good instincts. Hyde defended 15 passes in 2012 and had one pick.

And what? A solid tackler in the Packers secondary? Quite possibly.

Hyde is also a big-game player. In other words, he rises to the occasion.

The knock is he isn’t fast enough. Hyde ran a 4.56 in the 40 and while he’s good near the line, Hyde struggles when he’s forced to turn and run deep. That could mean he’ll move to safety in the NFL. He played both safety and cornerback during his career with the Hawks.

Oh, and he also got arrested last October for public intoxication, so he should fit right in in Green Bay.

Now let’s get on with some highlights!