The 49ers Won April Fools’ Day, While the Packers Lost 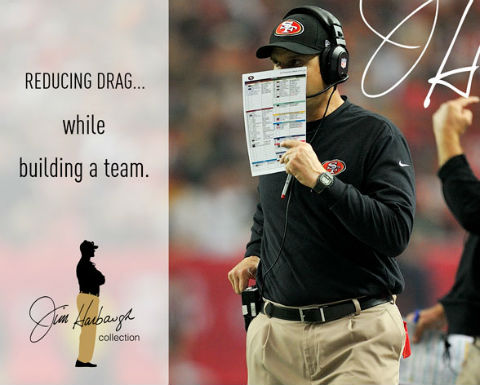 If you read this blog, you know how much we LOVE San Francisco 49ers coach Jim Harbaugh. Him being such a swell, stand-up guy and all. Anyway, you’ve probably also noticed Harbaugh wears the same tan pair of pants, black 49ers shirt and black 49ers hat everywhere.

That prompted the 49ers to launch the Jim Harbaugh Collection yesterday.

A trendsetter in the coaching profession, Harbaugh has inspired fans with a unique sideline look that he carries over into all facets of his life. Whether the 2011 AP Coach of the Year is stalking the sidelines of Candlestick Park or enjoying a round of golf at Pebble Beach, chances are he’ll be dawning his black fleece, khaki pants and 49ers black cap.

“I probably save about 20 minutes per day,” Harbaugh said about limiting his daily clothing decisions. “I’ve cut down a lot of drag.”

In addition to the fake news story, part of which you just read, there’s also a slideshow.

Meanwhile, the Green Bay Packers, being the bunch of humorless pricks they are, posted a column clearly marked as an April Fools’ joke where their fuddy duddy columnist asked fans questions. You know, instead of them asking him questions. Get it?

One of those gems was this: Why do fans want the Packers to sign every old, overpriced, worn-out free agent?

Did Ted Thompson write that one for you? Huh?

Well, we know from personal experience that Mark Murphy has to approve everything on the website (because that’s the CEO’s job), so this piece certainly crossed his desk and guess what. Mark Murphy is a laugh a minute!

Just a note for next year — it isn’t really an effective April Fools’ joke if you announce to everyone that it’s an April Fools’ joke beforehand. Also, you probably shouldn’t have front-office types making attempts at comedy.

For that, the Packers get a big April Fools’ FAIL!