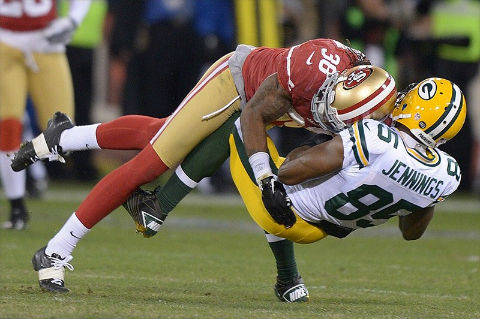 Maybe you’ve already fallen for some stupid prank and maybe you haven’t. If you fall into the latter category, this is your reminder that it’s April Fools’ Day and your favorite (and least-favorite) players are out there trying to make you look the fool.

That seemed pretty plausible when my buddy alerted me to it this morning. Jennings left the Packers for the Minnesota Vikings and has probably received some insults because of it on his lame-ass Twitter account.

Of course, it was all a ruse. Jennings cannot function without the attention.

And then there’s the much lamer attempt to pull the wool over your eyes by Packers left guard Josh Sitton, who suggested he got traded to the Dallas Cowboys.

There was also former Packers linebacker Nick Barnett suggesting he had re-signed with the Buffalo Bills, who cut him earlier this offseason.

So, remember to be skeptical today.