Packers Privately Admit What We All Know — They’re Too Soft 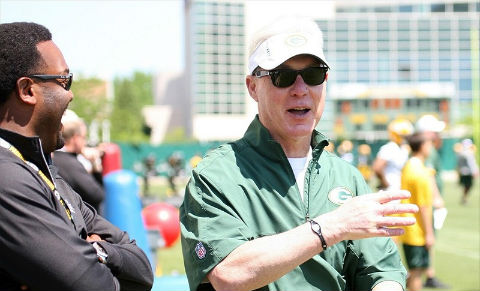 If you’re looking for something to hang your hat on when the Green Bay Packers are on the clock in this year’s draft, bet on this — they’re going to take guys who are big and physical.

That’s because the Packers are currently small, soft and easily pushed around. Too finesse. That point was hammered home in the playoff debacle in San Francisco. The Packers leadership has taken note and, according to Bob McGinn, admitted their folly privately.

But some people close to Mike McCarthy and Ted Thompson say the Green Bay Packers’ football leaders have freely acknowledged that perception in private over the past three months, and now are bound and determined to do something about it.

Finding bigger, more physical players for their 53-man roster should be the overriding theme for what the Packers attempt to accomplish in the upcoming draft.

We know this. The Packers are looking to add a defensive lineman, want to upgrade at left tackle and need to consider the tight end position.

The Packers have kicked the tires on a couple free agent defensive linemen this offseason and are giving Johnny Jolly a chance to return to the NFL after three seasons away. That tells you what they think of the current defensive line group.

Both the coaching staff and Aaron Rodgers have made it be known they’re not happy with the play of Marshall Newhouse at left tackle. Newhouse is a perfect example of the problem. He’ll never be seen mauling an opponent.

At tight end, the team only has one season left with Jermichael Finley and no one else on the roster has shown starter potential. Besides that, Andrew Quarless — with the possible exception of free agent signee Matt Mulligan — is now the only decent blocker on the roster and he hasn’t played in over a year because of injury.

The trenches. That’s where the Packers need to get better. They haven’t been able to punch anyone in the face and get away with it for years.

Will one draft class change that? Probably not, but the Packers can’t get much softer either.