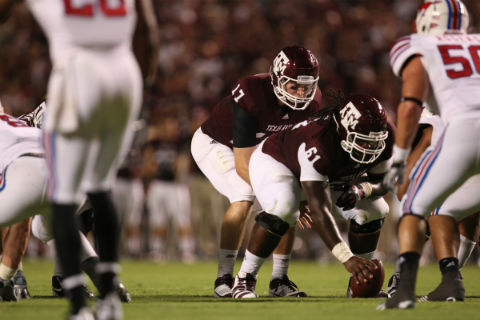 Each year under the Ted Thompson regime, the Packers end up keeping one or two (sometimes more) of these guys on the active roster. Last season, it was outside linebacker Dezman Moses, guard Greg Van Roten and tackle Don Barclay, who actually ended up becoming a starter.

Anyway, you get the picture. Some of these guys will be sticking around. Here’s the Packers class of 2013 undrafted free agents.

Lane Taylor, guard, Oklahoma St.
Taylor is 6-3, 324 and was first-team All-Big 12 in 2012. Started 47 games in his college career. Only allowed four pressures in 2012 and didn’t allow a sack. Not considered terribly athletic, but can work well in small spaces.

Matt Brown, quarterback, Illinois St.
Brown (6-4, 220) was a four-year starter for Illinois State. He was the Missouri Valley Football Conference Offensive Player of the Year in 2012, when he threw for 3,370 and 27 touchdowns. He also ran for seven scores. Threw for 10,591 yards in his career and accounted for 87 touchdowns.

Gilbert Pena, defensive tackle, Mississippi
Pena is 6-4, 317 and recorded 34 tackles, including 6.5 for loss and two sacks in 2012. Decent stopping the run, but has limited range. Pena wasn’t even a full-time starter for Mississippi and he spent four years away from football to take care of his mother while she had cancer.

Jake Stoneburner, tight end, Ohio State
Stoneburner (6-4, 245) actually played a hybrid H-back/receiver in 2012, as Ohio State switched to a spread offense. He produced 16 receptions for 269 yards and four touchdowns in that role. He has good hands and ran a 4.5 40. If this guy can block and play special teams, he might have a real shot at making the roster.

Jeremy Vujnovich, tackle, Louisiana College
Vujnovich is 6-5, 290 and ran a 4.87 40, which is fast for an offensive lineman. You can probably see the issues here, though. He played against inferior competition and he obviously needs to add some muscle to his frame. This guy would get mauled in an actual NFL game.

Patrick Lewis, center, Texas A&M
Lewis is 6-2, 312 and I can tell you why the Packers like him. He’s versatile. He moved to center from guard prior to his junior season. He was also a four-year starter. The Packers had Lewis in for a pre-draft visit, so they obviously had their eye on him.

Andy Mulumba, defensive end/outside linebacker, Eastern Michigan
Mulumba is what you’d call a tweener at 6-3, 260. He’s played both as a down lineman and standing up. In 2012, he had 73 tackles, including seven for a loss. Mulumba is not a great pass rusher. Doesn’t have good burst or speed, but is solid against the run. The Montreal native is expected to be taken in the CFL draft.

Myles White, wide receiver, Louisiana Tech
White is 6-1, 185 and caught 56 passes for 718 yards and six touchdowns in 2012. Started his college career at Michigan State before transferring to Northwest Mississippi CC and then, finally, Louisiana Tech. He was suspended by MSU in December of 2009 after pleading not guilty to public urination and underage possession charges.

Devin Willis, cornerback, Northern Arizona
Willis is 6-0, 178 and honestly, nothing about him really jumps out. In 2012, he had 41 tackles and one interception. He also knocked down six passes.