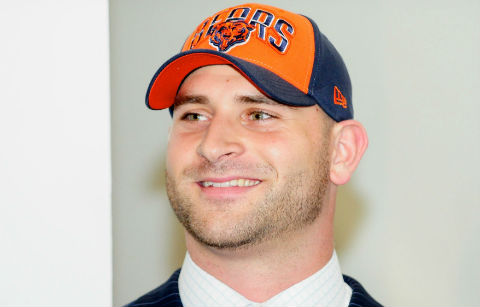 Hey, everyone else is doing it, so why shouldn’t we? Grading drafts classes of guys who haven’t even played yet, that is. It’s idiotic, but who are we to buck the trend? So here are our grades for the NFC North — the Green Bay Packers, Minnesota Vikings, Chicago Bears and Detroit Lions.

The Vikings managed to wrangle three first-round picks. They had two going into the draft and then they traded up for the third one by giving up a boatload of picks. After the trade, they were left them with a fourth, fifth and three sevenths. But forget all that. These asshats had THREE FIRST-ROUND PICKS! That right there tells you they’re going to the Super Bowl! Just ask any Vikings fan. In the first round, the Vikings grabbed Florida defensive tackle Sharrif Floyd, Florida State cornerback Xavier Rhodes and Tennessee receiver Cordarrelle Patterson.

Fuck the rest, this is a haul! Floyd was supposed to be a top-10 pick, but the Vikings got him at No. 23. That’s value, a coup… just ask a Vikings fan. Why did he slide? Not important at all! And then there’s Rhodes. This guy had three picks his senior season. He’s the heir-apparent to Antoine Winfield! He’s shutdown! Just look at him! And then there’s Patterson. Look, he has double R’s and double L’s in his first name! And look at these stats — 46 for 778 and five touchdowns. He’ll double that shit his first year in the NFL with Christian Ponder throwing him the ball!

These dickbags really outdid themselves. Mark them down for the Super Bowl. Or at least the NFC Championship game, where they’ll watch as Gary Anderson misses a short field goal that sends the Falcons to the Super Bowl.

For effort. Because this is Little League Baseball and everyone should get a trophy just for playing. In the first round, the Bears drafted guard Kyle Long of Oregon. Did everyone in the collective world say this was a reach? Who cares! The Bears are serious about improving that offensive line!

We didn’t hear much from the Bears, but that’s because they didn’t have many picks. After their brilliant first-round choice, the Bears had a second, fourth, fifth, sixth and seventh. Why do the Bears suck balls at acquiring draft picks and drafting in general, you might ask yourself. Who cares.

The Lions had the fifth pick in the draft because they suck ballsack. They chose BYU defensive end Ziggy Ansah, who was more notable for wearing 3D glasses to the draft than he was for college production. This guy had 4.5 sacks in college, with all of those coming during his senior season. Obviously, a force to be reckoned with. He’ll be expected to replace Cliff Avril and to a much, much lesser extent, Kyle Vanden Bosch. The former signed with Seattle and the latter was released because he’s too old and sucks.

Is this guy a project? Hell no! He’s a workout warrior who’s only been playing organized football for three years because somehow BYU Mormoned him from Ghana. Maybe he’s the next Jason Pierre-Paul. Maybe he’s the next Vernon Goldston. Either way, fuck you Detroit. I don’t even care who you drafted after this guy. You’re not competing this year.

The Packers drafted two running backs and we’re all excited about that. Of course, their offensive line can’t run block for shit, so let’s not get too excited about Eddie Lacy and Johnathan Franklin. What we do know is this — there will be some competition on the defensive line, which was disgusting last season. Datone Jones, the first-round pick, should start and Josh Boyd, the fifth-rounder, should at least get into the rotation.

And, as far as that ho-hum offensive line, at least the Packers picked two O-linemen in the fourth to tell the incumbents their jobs aren’t guaranteed. Otherwise, yeah… meh!