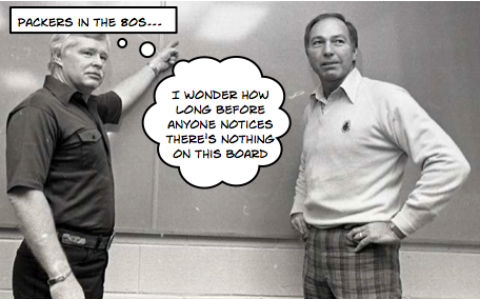 It’s draft day, so we’ve got something special for you — the Green Bay Packers all-time top 10 drafts.

Really, who knows better than we do? No one.

Choosing the Packers all-time best drafts was easier than you probably think.

You can pretty much throw out the entire decades of the 1970s and ’80s. The Packers managed to draft one Hall of Fame player in those two decades combined — James Lofton in 1978. However, that draft didn’t make the cut because linebacker Mike Douglass was the only other player worth more than a bag of Cheetos.

Vince Lombardi made some good picks in the ’60s, but he acquired a lot of the guys on those championship teams through trades and, as you’ll see, some of Lombardi’s best players were there before he arrived.

Ron Wolf’s biggest acquisitions were via trade (Brett Favre) and free agency (Reggie White). In fact, Wolf was much more noted for his free agent acquisitions than his drafts.

We’re not trying to lead you to believe our main man Ted Thompson, who only builds through the draft, is going to be featured heavily on this list, though. Most of Thompson’s draft classes are either too fresh to judge or noteworthy only in their blandness.

In fact, we’re going to bet you’ll be surprised at who presided over the best draft in Green Bay Packers history.

Before we get to it, we’re handing out a couple honorable mentions to two Ron Wolf classes, since he won’t have any on the list (and these two just missed the cut).

We say arguably because Wolf also had a solid class in 1992, when he took Robert Brooks (3rd), Edgar Bennett (4th) and three-time Pro Bowler Mark Chmura (6th). Those were three big-time contributors to the Packers success throughout the 1990s.

Previous Article
Packers Waive D.J. Smith
Next Article
With Their First Pick in the 2013 NFL Draft, the Packers Select…