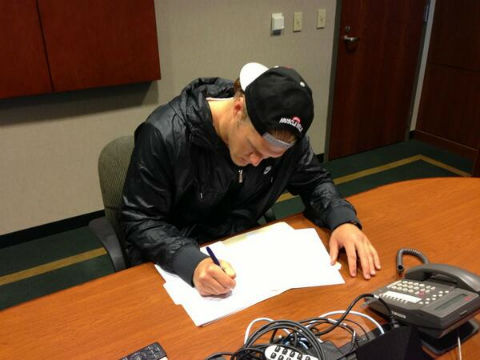 The Green Bay Packers have reached an agreement with outside linebacker Clay Matthews on a new long-term contract extension. The info was first reported by Ian Rapoport.

Then Matthews confirmed it when he tweeted a picture of himself signing the deal.

Trivial amongst the recent tragic news, but happy to continue my career in Green Bay! pic.twitter.com/MLMz95RakX

Jay Glazer says Matthews’ new deal is for five additional years at a little more than $13 million per season. Matthews is currently in the final season of his rookie deal, so the extension will keep him in Green Bay through 2018. He’ll be 32 at the end of that season.

Matthews was scheduled to make $3.73 million in base salary in 2013, plus $1.02 million in bonuses. That’s a total of $4.75 million. Although we don’t know the exact amount of Matthews’ new deal, let’s say it’s exactly $13 million per season in new money.

That would make the average of Matthews’ full deal $11.625 million per season. It would also make him the highest-paid outside linebacker in the NFL, surpassing the $11.143 million average the Cowboys’ DeMarcus Ware makes.

The most interesting thing to see will be how the contract is structured, but that’s probably fodder for another post.