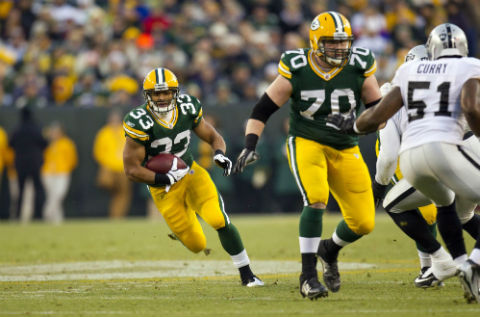 You remember Brandon Saine, don’t you? He came up to the active roster in 2011 from the practice squad after signing with the Green Bay Packers as an undrafted rookie. Then he tore his ACL in week six last season and spent the rest of the year on injured reserve. Well, Saine won’t be playing for the Packers in 2013 either.

The team waived him on Wednesday after he failed his physical.

He didn’t carry the ball at all in 2012, playing only on special teams before the injury ended his season.

Was Saine going to make the roster in 2013 if he were healthy? Doubtful.

The Packers have plenty of mediocre running backs already — James Starks, Alex Green. Then they have one guy who looks promising in DuJuan Harris and the option to bring back veteran Cedric Benson if they want. They’ll probably draft a running back too.

It was time to trim the fat.

Starks and Green can join Saine on the street as far as we’re concerned.