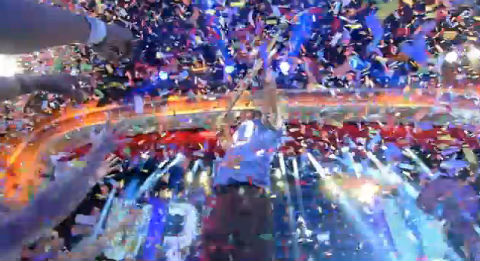 This may literally be the stupidest thing you’ve ever seen. Yesterday, former Detroit Lions running back Barry Sanders was revealed as the winner of the fan vote for the cover of the next Madden.

He beat Minnesota Vikings running back Adrian Peterson and oh boy was he excited.

First, the look on his face says, “I’ve actually won something of substance and worth!” And, well, he didn’t.

But then there are the pathetic, rabid, overly-excited fans in the studio — many wearing Sanders jerseys or shirts that simply read “Barry” — whooping it up, yelling crazily and so forth as if the Lions had just won the Super Bowl or they had just won the Lotto… or maybe a case of Faygo.

“As a Detroit Lions fan, this is the best it’s ever gonna get! Woooooo! We’ve reached the pinnacle!”

So, throw in a drawn-out… pause… annnouce… pause… ment from the ESPN crew and lots of confetti and you’ve got something that is both sad and excruciating.

But like a train wreck, you just have to crane your neck as you drive by.

Previous Article
With Their First Pick in the 2013 NFL Draft, the Packers Select…
Next Article
Every Fan Who’s At the NFL Draft is An Idiot