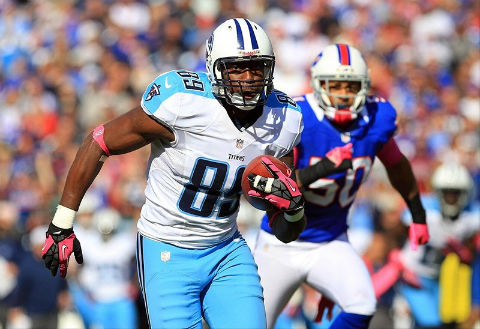 The Chicago Bears are going to be all about offense in 2013. You knew that when they replaced Lovie Smith with Marc Trestman as head coach. It looks like their next priority will be improving their receiving corp and that starts with the tight end position.

The Bears are looking for an upgrade over Kellen Davis, who caught just 19 balls for 229 yards in 2012. They’re also looking to improve a group that was inconsequential after Brandon Marshall and his 118 receptions. No other Bears receiver had more than 45 catches.

The Bears’ No. 1 target now appears to be Tennessee Titans tight end Jared Cook. The Titans were expected to franchise Cook, but didn’t because he claimed he should be treated as a wide receiver. It’s the same bullshit claim Jermichael Finley made before free agency last season. The franchise tag for receivers is $3.5 million more than for tight ends.

Obviously he would be an instant upgrade for the Bears, who are expected to feature the tight end more prominently under offensive coordinator Aaron Kromer, who comes to Chicago from New Orleans.

Cook’s situation raises some questions about the Green Bay Packers own tight end situation. They currently have Finley under contract for $8.25 million, which is an absurd amount when compared to his production.

It’s been suggested that the Bears would make a run at Finley if the Packers release him. If the Packers do decide to go in that direction, they could always sign Cook to replace him.

Both players are 25 and they’re pretty much exactly the same size (6-5, 245ish). Cook seems to flap his lips a lot less than Finley though.

Just a thought to ponder.

Aaron Rodgers Concerned About Contract, But Won’t Hold Out