Peyton Hillis is Visiting the Packers 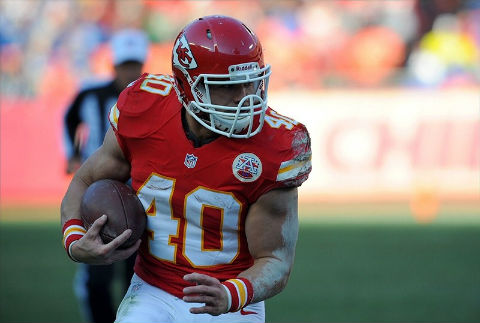 At least the Green Bay Packers are presenting the appearance of being active in free agency. Running back Peyton Hillis, who spent last season in Kansas City, is visiting according to Adam Schefter.

Why would the Packers be interested in a guy who carried just 85 times for 309 yards in 2012? Possibly for a couple reasons.

First, if their interest in genuine, Hillis fits the mold. He’s a bruising runner, which is clearly what they’ve decided they need. He’s also only 27, so he could have some productive seasons left. Hillis actually rushed for 1,177 yards and 11 touchdowns with Cleveland in 2010.

Then he was on the cover of Madden. Then he fell off the face of the earth.

The other possibility is the Packers are using Hillis as a fallback (or leverage) with Steven Jackson, the running back they really want. The Packers have — get this — actually been in touch with Jackson’s reps today. There have been reports they’ve even discussed a contract.

And earlier today, PFT called the Packers the leaders to land Jackson.

We’ll pause while you clean out your drawers…

The lack of a deal with Jackson says the Packers don’t want to meet his price. So Hillis could be their passive aggressive way of saying take our price or find another team.

The only problem with that is, Jackson won’t have a problem finding another team. Atlanta also likes Jackson quite a bit and they’re probably more willing than the Packers to meet his price.

But Steven, don’t you know what a privilege it is to take considerably less money to play in Green Bay!!??

So keep your fingers crossed, I guess.

Chris Canty Signed with Baltimore Because of Course He Did