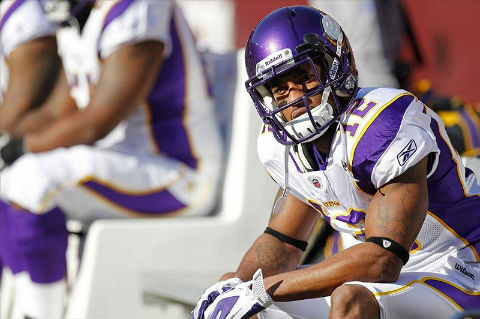 There has been jack shit going on since the unofficial beginning of free agency, but we’re more than happy to report that the Minnesota Vikings are probably going to implode. The culprit: receiver Percy Harvin and the Vikings idiot front office.

Harvin first asked for a trade last offseason and why wouldn’t he? He plays for the Vikings.

It’s well known that Harvin also wants a new contract. He’s currently in the final season of his rookie deal. Meanwhile, the Vikings haven’t bothered to re-up his deal and have publicly said they have no interest in trading him.

Not only did Harvin ask to be traded, but he also got in a confrontation with coach Leslie Frazier last season. It’s also been reported that he threatened to walk out on the team during training camp in another contract-related flap.

“[The Vikings are] in a tough spot,” one source said. “If you don’t take some aggressive action, this could get really bad.”

We hope it does and it’s rapidly progressing in that direction.

Today there was a report in the Star Tribune that has Harvin telling the Vikings he won’t play for them.

If you recall, the Green Bay Packers have some experience with situations like these. Twin turds Mike McKenzie and Javon Walker both demanded trades after starting their careers in Green Bay. Both eventually got what they asked for.

The Packers did their best to minimize the distraction each player caused, essentially ignoring them after the team released their prepared statements. Will the Vikings manage to do the same?

Doubt it. They’re the Vikings. Stupidity and failure is par for the course.

Hopefully, this situation will derail their season before it even begins.