Packers Will Not Be Signing Michael Huff, To the Surprise of No One 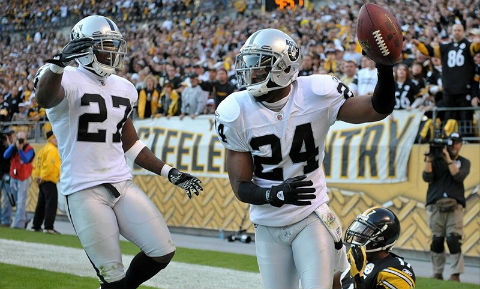 The Green Bay Packers lost out on another free agent they were pretending to be interested in. Safety Michael Huff signed with the Baltimore Ravens, Wednesday.

What’s somewhat astonishing is the Packers managed not to completely bungle this one themselves. They didn’t even insult Huff with some low-ball offer. That’s because Huff signed with the Ravens before he even visited the Packers.

That being said, if he thought the Packers were serious and willing to make a decent offer, then he probably would have made his visit to Green Bay as scheduled. Obviously, the Ravens are something the Packers are not, other than winners of playoff games. They’re aggressive.

We have to wonder how seriously free agents take any “interest” from the Packers. The organization’s M.O. is pretty clear — go after guys who have few options and try to get them to sign a deal below market value.

If the Packers are good for anything in free agency, it’s being used as a negotiation ploy. Both Steven Jackson and Greg Jennings used the Packers’ perceived interest to drive up their price elsewhere.

As for the Packers’ safety situation, our bet is they draft one. This is one of the deepest drafts for safeties in years and there’s a good chance the Packers can grab a day-one starter in the first or second round.