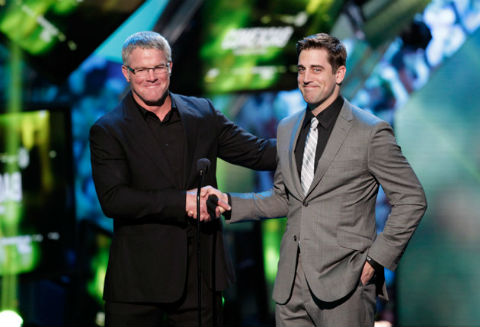 The Green Bay Packers will be retiring Brett Favre‘s No. 4 in some sort of feel-good, all-is-forgiven ceremony at Lambeau Field, but much like when someone dredged this up last year, the Packers still haven’t made a commitment to when that will be.

At this time last year the line was, sometime, but not during the 2012 season. Now, the line is, sometime, but probably not this season. Packers president Mark Murphy said the organization hasn’t had contact with Favre since the Super Bowl.

During Super Bowl week, Favre made an appearance with Aaron Rodgers at the NFL Honors. They presented the Comeback Player of the Year award to Peyton Manning. From the sound of it, the Packers had something to do with that.

Frankly, we wouldn’t doubt it. From our dealings with the Packers organization, we know they like to micro-manage the shit out of everything. I once sent a proposal to their website editor. It had to be presented to Murphy for approval.

Anyway, it seems clear the Packers stuck their nose pretty far into that joint appearance and it wasn’t just something Rodgers and Favre did just because they were asked. It was a stupid, calculated public relations move.

“I thought that was great,” Murphy said. “It was kind of a good first step, and our intent all along is we want to bring him back into the family and retire his number. He deserves it.”

So now the Packers have gotten Favre and Rodgers together and everyone had a laugh. Good job!

Next, the Packers will need to sit down with Favre and work out a date for the ceremony. Who knows when that will happen, but you’ll surely get treated to more contrived moments to make you forget what a debacle this all was along the way.