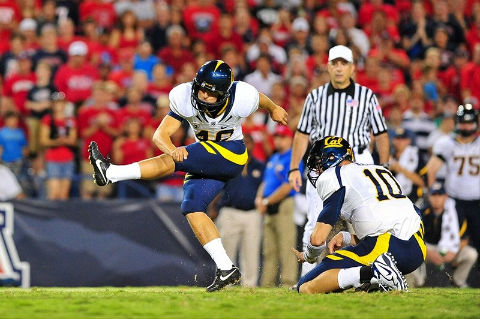 Mason Crosby will finally have some competition. The Green Bay Packers have signed former Cal kicker Giorgio Tavecchio, according to John Breech.

Now, you’re probably asking yourself, who the hell is this clown?

Tavecchio went to camp with San Francisco last season, but was released in favor of veteran David Akers. During his college career (2008-11), Tavecchio made 48-of-64 (75 percent) field goal attempts and 112-of-120 (93.3 percent) extra point tries.

Those aren’t exactly awe-inspiring numbers. In fact, they’re a lot like Crosby’s non-awe-inspiring NFL numbers. The Packers incumbent kicker has only hit on 76.8 percent of his career field goal attempts. In 2012, he was even worse though, hitting just 21-of-33 (63.6 percent).

One other thing to know about Tavecchio — if you couldn’t tell by the name, he’s really Italian. He was born in Milan, so he’ll probably fit in well with Green Bay’s large Italian population.

Anyway, if there’s any reason to wonder how legitimate of a “competition” this will be, it’s this. Akers sucked pretty bad last season and the 49ers didn’t run out and re-sign Tavecchio. In fact, they signed veteran retread Billy Cundiff to push Akers when the playoffs rolled around.

So, in theory, Tavecchio is competition for Crosby. However, the Packers may have just signed a guy they know Crosby is going to beat in attempt to get his confidence up.