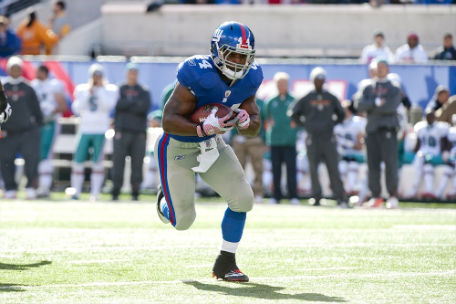 The Green Bay Packers reportedly have a new target to help them perpetuate their failure of an offseason — free agent running back Ahmad Bradshaw.

Bradshaw, who rushed for 1,015 yards with the Giants in 14 games last season, is being targeted by the Packers and Pittsburgh Steelers, according to Adam Schefter.

We actually like Bradshaw better than Steven Jackson, who the Packers were hot on last week and then failed to sign. Although he’s had some injuries, missing four games in 2011 and two in 2012, Bradshaw turns 27 this week. Jackson will be 30 when the season starts.

Additionally, Bradshaw will probably come a lot cheaper than Jackson and we all know the Packers have zero desire to pay market value for anyone.

“So you’re tellin’ me there’s a chance!”

Why yes, Lloyd, I am. There’s not a lot of competition for Bradshaw, so that definitely works in the Packers favor. In Pittsburgh, Bradshaw walks into a crowded backfield. In Green Bay, he’s probably the default starter.

Of course, the way the Packers have been operating this offseason, they’ll refuse to budge on their offer and Bradshaw will sign with Pittsburgh for $5 more. If Ted Thompson has shown us anything in recent weeks it’s that failure is par for the course.

Previous Article
With Tom Crabtree Out, Jermichael Finley is Probably In
Next Article
Conspiracy! Or What Really Happened with Greg Jennings