Christian Ponder will be Getting Benched for Matt Cassel 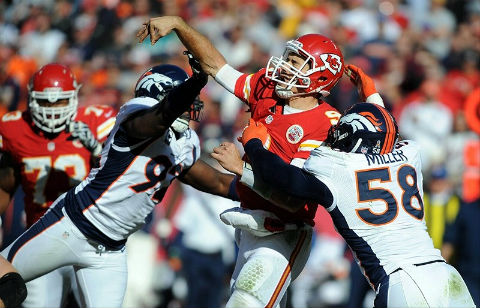 The Minnesota Vikings are serious about pretending they haven’t hitched their wagon to the terribly awful Christian Ponder and his awfully terrible quarterbacking skills. As such, they signed Matt Cassel, who was discarded by 2012’s worst team — the Chiefs — on Thursday.

The Vikings really know how to make a splash, don’t they?!

So now they have two really terrible quarterbacks and guess what. They’re reportedly going to let these two clowns duke it out in what’s sure to be the ultimate shit show of the summer. Maybe the Vikings would give you a shot at being their starting quarterback. Hell, send them your highlight tape!

At the very least, they’ll probably let you battle it out with Uncle Rico for the third spot on the depth chart.

Ponder started 2012 looking curiously serviceable, but that quickly went down the toilet. He ended up starting all 16 games for the Vikings, but somehow managed to not throw for 3,000 yards. In fact, Ponder threw for just 52 yards more than the only full-time starter you could argue was worse in 2012 — Mark Sanchez (Nacho!). And Nacho! only started 15 games.

And then there’s Cassel, who tossed six TDs and 12 interceptions in nine games before, mercifully, getting shut down.

After the season, the Vikings did the “Ponder’s our guy” routine. The Chiefs did no such thing with Cassel.

Now, the Vikings apparently aren’t so sure Ponder is their guy, so they brought in “competition” to push him to new heights. Really, the Vikings have to open the season with Ponder under center because they’re the idiots who wasted a first-round pick on him.

So that means Cassel will be replacing him as the starter around midseason.