You'll Be Happy to Know Brett Favre is a Good Tipper 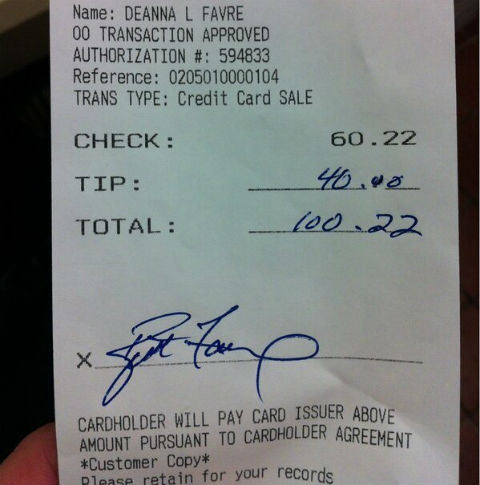 Former Green Bay Packers quarterback Brett Favre is a lot of things. We won”t name all of them here, but you can be assured that he”s also a good tipper.

This image may be old as hell for all we know. We looked on the Twitter account it supposedly came from and found nothing. But someone else posted it today and it”s the first time we”ve seen it, so now we”re delivering it to you.

That”s old Favre-o dropping $40 on a $60 bill. That”s a real solid 66 percent. I don”t even go that high when the waitress online casino fellates me under the table during dessert.

But hey, Favrelous can certainly afford it.

We”re also going to note two things from this photo.

First, he used his old lady”s card to pay the bill. Hell, she”s got all that cancer money and besides, it”s her turn to pick up the tab anyway.

Second, despite being loaded, Brett and Deanna obviously still eat like the white trash they are. Where does $60 get you a meal for two? Applebee”s? TGI Friday”s?

It sure as hell doesn”t get you one at Brett Favre”s Steakhouse.