Watch Old Lady Lose It When Donald Driver Shows Up 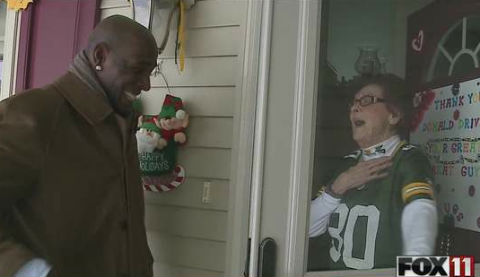 After his retirement event at Lambeau on Wednesday, Driver dropped by the home of 78-year-old Packers fan and Bellevue resident Angie LeRoy. Of course, Fox 11 was there to capture the moment.

In fact, they were at LeRoy’s home the day before for some unknown, let’s-make-up-some-news reason. You see, she didn’t have a ticket to Driver’s retirement ceremony and, well, she really, really wanted one.

And there you have a news story… in Green Bay — Local Woman Really Wants to Go to Donald Driver’s Retirement Ceremony.

That could be a headline in The Onion, but instead it’s on local television. Anyway, while the TV crew was there on Tuesday, LeRoy said her dream in life was to meet and touch Donald Driver.

“He is my idol. I was a cancer survivor, and I just hope someday I can get a big hug from him,” she said.

Of course, Driver saw that story and this is what went down.

We commend Fox 11 on their Pulitzer-worthy reporting. That investigative journalism prize will surely be yours!