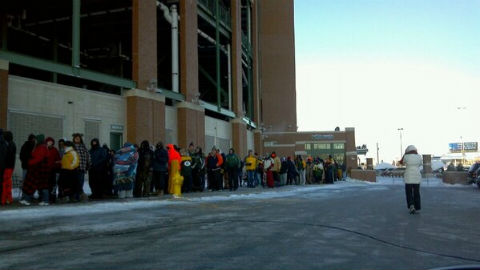 Were you one of the people who skipped work this morning, threw on your coveralls and drove over to Lambeau Field to get tickets to Donald Driver‘s retirement ceremony?

Apparently, tickets to the Green Bay Packers all-time leading receiver’s farewell event were a popular item. The temperature was -3 in Green Bay Friday morning, which is when the Packers started handing out the free tickets to Driver’s ceremony.

The good news is, people probably didn’t have to stand there that long. The Packers began handing out the tickets at 9 a.m. local time and they were gone by 9:14. Around 1,000 were handed out.

Here’s what the tickets look like, in case you were wondering. These bad boys belong to Lisa Hartley, who said she was around the 250th person in line this morning.

And to quote, “I froze my butt off, but it was so worth it.”

Previous Article
Donald Driver: I Wanted to Make it Easy on the Packers
Next Article
Here’s Greg Jennings at the Super Bowl [Photos]