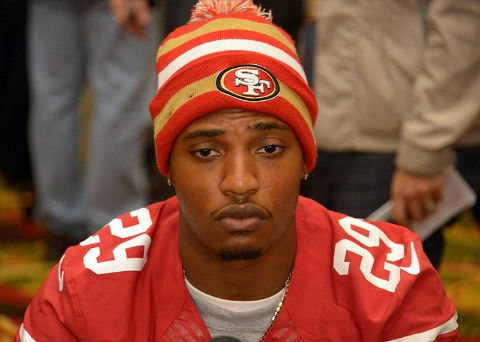 Who’s a bigger distraction — Ray Lewis or Chris Culliver?
One of the reasons the losing team will inevitably lose this game is because they were distracted. Not because they got outplayed in a game of football on an actual field, but because their focus was taken away by something completely unrelated. Just wait for the assembled media throng to force this one down your throat.

For Baltimore, the distraction was Ray Lewis. Specifically, the accusation that he took a banned substance to help him recover from a torn tricep and return to the field in time for the playoffs. Well, he made a miraculous recovery, but he’s never failed a drug test. Wait. The NFL doesn’t actually test for that substance even though it’s banned? Oh. Well, obviously there’s nothing to see here.

“I don’t do the gay guys, man. I don’t do that,” Culliver said during the 1-minute taped interview. ”Ain’t got no gay people on the team. They gotta get up outta here if they do. Can’t be with that sweet stuff.”

Can’t be with that sweet stuff… Culliver went on to say he hopes he doesn’t get AIDS by sitting on a public toilet seat.

I don’t think I need to point out that Culliver plays in a city with a large and vocal gay community, but I will anyway because apparently that didn’t occur to him. So the 49ers had to scramble and Culliver eventually played the “that’s not how I really feel” card. Again, nothing to see here.

Be sure to enjoy the commercials because that’s all you get until August.