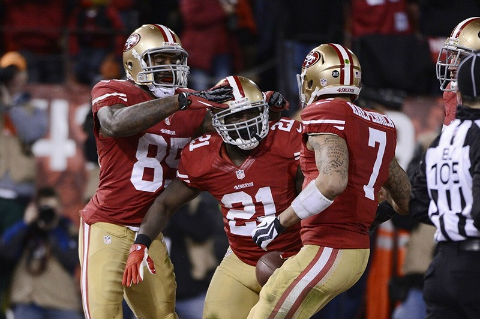 San Francisco 49ers vs. Baltimore Ravens in Super Bowl XLVII. Could you be any less excited?

But hell, it’s the Super Bowl, so here’s one final What to Watch For before we kill and bury the ugly bastard that was the 2012 season.

Who’s not playing?
This is the Super Bowl. You play unless your leg was amputated above the knee. Seriously though, the Ravens and 49ers are pretty healthy. That’s one of the reasons they’re playing in this game. No one on either side is worse than probable.

Who should I bet on?
The 49ers are a 3.5 to 4-point favorite. Neither team is very impressive against the spread, so there’s really no clear-cut pick here. Of the teams, the 49ers look like the only one capable of running away with the game, but Baltimore has all that idiotic Ray Lewis mojo going on. If you throw that out the window, you realize the 49ers are better on both sides of the ball. Take San Fran.

Aaron Rodgers and Brett Favre Got Together Last Night [Video]

Aaron Rodgers and Brett Favre Got Together Last Night [Video]