Packers Try to Sign Top CFL Lineman, Then Shoo Him Away 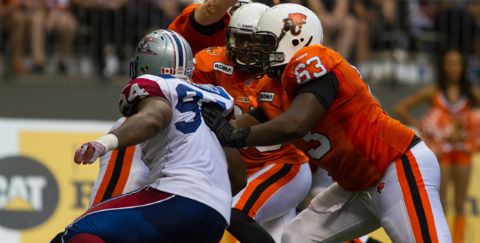 The Green Bay Packers almost made what might have been a fairly impressive signing… until they didn’t.

The Packers brought in Jovan Olafioye, who was named the top offensive lineman in the CFL in 2012, and wanted to sign him to a contract. Then their medical staff, who have really been on top of their game lately, killed the deal.

For some reason, they didn’t like the fact that Olafioye requires medication to control hypertension, even though he’s been cleared by multiple doctors.

According to the Journal Sentinel, the Packers arrived at the decision without running any tests on the 6 foot 5½ inch, 320 pounder.

The Packers ran no tests on the 25-year-old Olafioye, who started every game the last three seasons with the British Columbia Lions. Instead, they reached their decision after studying medical reports sent to them by Olafioye’s doctors.

“They’re sure I’ll be playing for somebody in the NFL this year,” said Olafioye. “That was encouraging. They said my situation is controllable but they didn’t want to take that risk. With their rules they can’t mess with my situation.”

In fairness to the Packers, the Rams signed Olafioye to a contract last offseason, but then failed him on his physical, forcing him to return to British Columbia.

Even though he has impressive size and an interesting resume, Olafioye probably would have been viewed as a developmental player in Green Bay. That being said, the offensive line obviously needs an upgrade and some added competition certainly wouldn’t have hurt.

The Packers did make one signing in that area on Friday, adding tackle/guard Kevin Hughes, who played for St. Louis in 2011 and spent part of last season on San Diego’s practice squad.

Donald Driver: I’m Keeping My Promise to the Fans

Donald Driver: I'm Keeping My Promise to the Fans