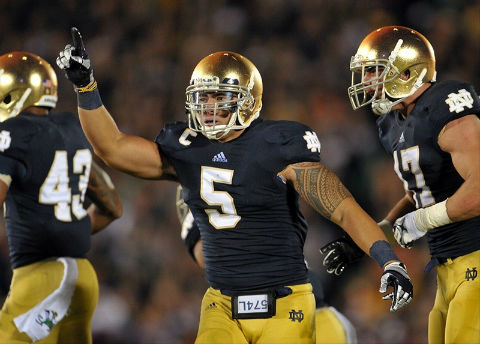 It’s probably nothing more than a team doing their due dilligence, but the Green Bay Packers were one of the first teams to meet with Notre Dame linebacker Manti Te’o on Saturday.

Te’o was the center of the media’s attention at the combine after his offseason admission of being duped by an online girlfriend that didn’t exist. Te’o reportedly learned of the ruse in December, but kept talking about the fake woman in the media after that. The Packers, along with the 20 or so other teams Te’o has been meeting with, obviously asked about the situation.

The question seems to be one of trust and, perhaps surprisingly, and not about stupidity.

“It could be a hurdle, but it could also be an opportunity to show how you really are. That’s the way I have approached it, and it’s been a big learning experience for me.”

On the field, Te’o turned in a season that saw him finish as the Heisman Trophy runner up. He tied for the FBS lead with seven interceptions and led Notre Dame to the national championship game.

The biggest knock on Te’o right now doesn’t seem to be the girlfriend hoax, but the fact that he and his team played like crap in their blowout loss to Alabama in the championship game.

When you add it all up, a lot of people are predicting Te’o will slide to the bottom of the first round. Mel Kiper originally had Te’o slotted as a top-five pick, but now has him going at No. 13. ESPN’s other draft guru, Todd McShay, has Te’o slipping to No. 20. The Packers pick at No. 26. NFL Network analyst Bucky Brooks has Te’o sliding all the way to that pick.

Could the Packers use a playmaking inside linebacker? You bet your ass they could.

Who knows how effective Desmond Bishop and D.J. Smith will be after returning from injury. Both ended the 2012 season on IR, with Bishop spending the whole season there. Then there’s the joke that is A.J. Hawk, who the Packers need to put out of his misery. Finally, there’s Brad Jones, who played well enough as a fill in, but is probably nothing more than a decent backup. He’s also a free agent.