Nick Barnett Gets Cut By Another Team 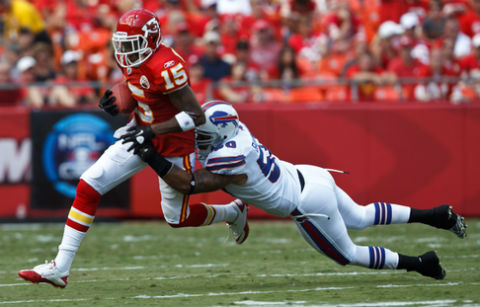 Two offseasons ago, the Green Bay Packers released linebacker Nick Barnett on the eve of training camp, making the excellent decision to go with Desmond Bishop and the regrettable one to start A.J. Hawk alongside him at inside linebacker. Well, after two seasons with the Buffalo Bills, Barnett is unwanted again.

Barnett made the announcement via Twitter, but for some reason, that suckbag has blocked us, so we can’t give you the link to the actual tweet.

Maybe his vag hurt because we were at one time critical of his play. Seems like something the guy who once publicly complained about not being in the Packers Super Bowl photo would do. Or a guy who sometimes wears fangs would do.

He’s also the guy who said Buffalo has a better football atmosphere than Green Bay, we should point out.

Despite generally being a dick, Barnett was actually solid in both of his seasons with the Bills. He had 130 tackles, 3 sacks, 3 INTs and a forced fumble in 2011. He followed that with 112 tackles, 2 sacks and 3 forced fumbles in 2012.

Of course, Barnett played on some pretty awful defenses and his numbers may look better than they actually are. The Bills aren’t known for moving the ball very much on offense, so Barnett and his mates spent a lot of time on the field the past two seasons. Plenty of time to pile up impressive-looking stats.

Barnett was due $3.5 million in 2013, which was at least partially responsible for this release. Another reason is the Bills have a new coaching staff.

Will Barnett get another NFL shot? Probably.

Even though he’s 31, Barnett started all 16 games the past two seasons. One of the reasons the Packers let him go was they deemed him injury-prone.

He’s seemingly shed that label and looks like he can still contribute, at least for a really bad team. Do Kansas City or Jacksonville have an opening at inside linebacker? Or what about Detroit?