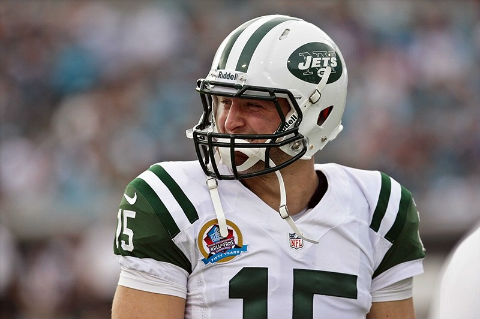 Probably, but the thought popped up after reading something the usually-bloviated Peter King wrote yesterday in a response to a comment that Tebow would be the same failure in the CFL he is in the NFL.

That is, the only way Tebow has any chance of succeeding as a quarterback in the NFL is if he ends up on a team with a coach known for mentoring quarterbacks. Specifically, those teams would include New Orleans (Sean Payton), San Francisco (Jim Harbaugh) and Green Bay with Mike McCarthy.

Tebow’s issue has always been accuracy, but you have to think if anyone is going to make anything of him, it has to be McCarthy.

Does it make sense that the Packers will take the time for this experiment? A little.

Graham Harrell hasn’t inspired a lot of confidence as the team’s No. 2 quarterback. Although Tebow couldn’t hit the broad side of a barn, he has shown a knack for winning (7-4 as a starter in Denver in 2011).

He also brings a running threat to the quarterback position.

Tebow should also be available for no compensation. The New York Jets traded for Tebow last offseason, but are expected to release him if they can’t trade him. Currently, there is no market for Tebow’s services.

The downside to such a marriage is dual.

If Aaron Rodgers goes down, the Packers aren’t likely to change their offense to the read-option style Tebow would be most successful in. McCarthy and change do not go hand in hand.

The second drawback is the whole Jesus Boy circus Tebow brings with him. Tebow is an outspoken Christian nutjob. That’s made him really popular — so much so that ESPN had a special team covering Jets training camp last year.

The Packers aren’t known for putting up with such tomfoolery.

Is any NFL team? That remains to be seen.

If Tebow wants to stay in the NFL he’d be wise to take whatever sort of deal he can get in order to work with a coach who can develop him.