James Jones Will Be Your No. 1 Receiver 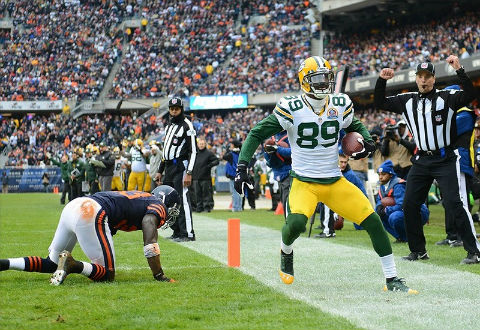 The Green Bay Packers will look somewhat different at receiver in 2013 and James Jones is ready to take on a bigger role.

Donald Driver retired. Greg Jennings will leave via free agency. That leaves Jones, Jordy Nelson and Randall Cobb to compete for the Packers top receiver spot, which was previously occupied by Jennings when healthy.

Jones, who’s coming off a career season, says he’s up to the challenge.

A couple years ago, we all would have laughed at that statement. Jones turned in his share of big plays through the first five years of his career, but he wasn’t known for that. He was known for dropping footballs.

Then a focused James Jones showed up in 2012. That guy made a habit of talking to himself on the field, telling himself to stay focused during games. It worked. The drops became but a memory, as Jones caught 64 balls for 784 yards and a team-leading 14 touchdowns.

He also authored the most-impressive catches of the season.

Nelson isn’t exactly a possession receiver and Cobb works best from the slot, so the door is open.

This isn’t to suggest Jones is the Packers best receiver, but if he builds on last season he could be in the conversation.