First Arrest of the Offseason Goes to the Chicago Bears! 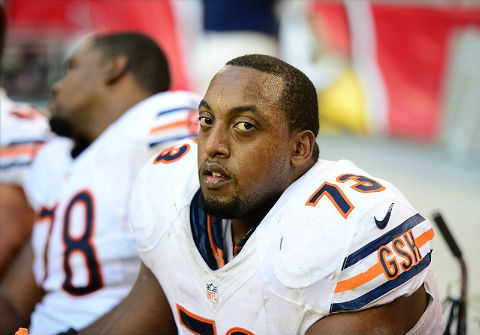 The Minnesota Vikings and Detroit Lions have been slacking. We’re already a month into the offseason and no one from either perennial offender has been arrested (that we’re aware of). Instead, Chicago Bears tackle J’Marcus Webb has checked in with the first NFC North arrest of the offseason.

You’ll remember Webb as the dude who got shoved by quarterback Jay Cutler during the Bears first 2012 loss to the Green Bay Packers. Webb was busy getting abused by Packers pass rushers and Cutty no likey. Cutty take his football. Cutty go home!

So what egregious crime did the now-depressed-for-not-earning-Jay-Cutler’s-admiration tackle commit? Murder? Rape? Solicitation of a minor?

Nope. He was smoking weed.

Actually, he wasn’t even smoking it. Webb got pulled over in Pulaski County for speeding and the copper found a small amount of weed in his vehicle. If Webb is guilty of anything here, it’s of being stupid.

Look at the guy though. The look on his face doesn’t really scream Rhodes Scholar, does it?