Donald Driver May Be Getting a Street 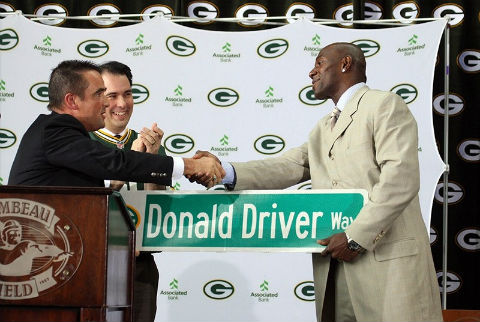 Somehow we missed this yesterday, but Donald Driver could be getting his own street in Green Bay.

Word is, city officials want to rename part of Pearl St. for the Green Bay Packers all-time leading receiver. The portion by Titletown Brewing would be renamed Donald Driver Way.

The city has also announced plans to refurbish the receiver statue that sits outside of Titletown, turning it into a Driver statue. Presumably, that means changing the number from 88 to 80, slapping the Driver name on the back of the jersey and changing the guy’s skin color.

A white receiver? What were they thinking to begin with?

If the city wants to save a few bucks, they could just change the number to 85 and slap on a mullet and it’s a Jeff Query statue! Boom!

Anyway, the city council needs to approve renaming the street for Driver before anything becomes official. We’re still waiting on Mike McCarthy to get the street he was promised after winning the Super Bowl two seasons ago.

So this could literally take years.