Donald Driver: I’m Keeping My Promise to the Fans 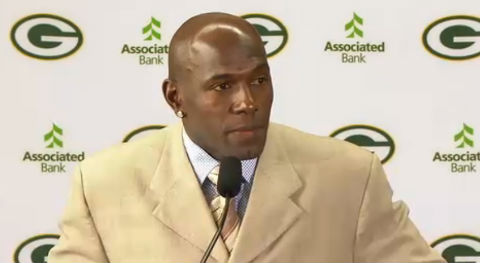 Donald Driver officially retired from the Green Bay Packers and the NFL today with ceremony and press conference at Lambeau Field.

After thanking Packers management and coaches, friends and family, Driver gave his final shout out to the fans.

“Last but not least, to the fans, I want to thank you all for the love, the joy, the tears.”

“This day is not just for me. This day is for you. Twelve years ago, I signed my first big contract with the Packers and I promised you all that I would never wear another uniform. So today, we make that official. I keep my promise to you.”

Solid until the end, that guy.

As you might expect, the event was fairly, uh… uneventful. You got the obligatory highlight package, people talking about what Driver meant to the organization and the state of Wisconsin and then Driver thanking the people in his life.

Driver didn’t give away much about his future plans, if he’s made any.

Perhaps the most noteworthy announcement was that the city will be refurbishing the receiver statue outside of Titletown Brewing so that it’s a statue of Driver. If you’re old enough, you’ll remember the receiver statue was originally located outside the Packers Hall of Fame when it was in the Brown County Arena.

Previous Article
Packers Try to Sign Top CFL Lineman, Then Shoo Him Away
Next Article
Jay Cutler is Super Romantic and Also Brilliant