Donald Driver: I Wanted to Make it Easy on the Packers 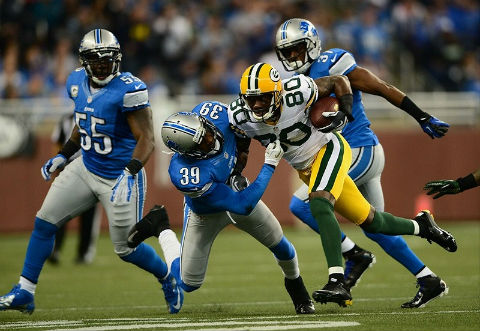 Donald Driver knew the Green Bay Packers weren’t planning on bringing him back in 2013 and told Tom Silverstein he retired to make things easy on the organization.

Driver revealed this on Thursday in New Orleans, saying he knew his fate when he had his exit interview with coach Mike McCarthy.

“I just wanted to make it easy on the organization, not put any pressure on them and just be able to walk away on my own terms and not have them say, we’re not going to bring you back.”

That’s pretty refreshing considering what the Packers went through with Brett Favre, who obviously didn’t give a shit about the organization or the fans.

Driver is nearly as beloved by the faithful as Favre was then. Ever image conscious, the organization has been very careful with their handling of fan favorites since the Favre debacle. We’ve suggested the Packers kept Driver on the roster in 2012 just to avoid another PR disaster.

Driver’s role in 2012 (or lack thereof) seems to suggest there was some truth to that theory.

Although Driver stands by his assertion that he can still play, he’s repeatedly said he only wants to suit up for the Green Bay Packers. On Thursday, he proved that.

“Do I feel like I can still play? Yes,” Driver said. “But at the end of the day, I owe it to the fans to put the cleats up. I promised them years ago that I would never wear nothing but green and gold, so I owe it to them to walk away.”

Love that guy more today than I did yesterday.

It will be interesting to see if the Packers give Driver a role with the team like they once offered Favre. We should know more about that when Driver officially retires at Lambeau Field on Feb. 6.