They Didn’t Think Much of Lovie Smith in Illinois

A lot of people were surprised when the Chicago Bears fired coach Lovie Smith after a 10-6 season, but it doesn’t look like many of those people reside in Illinois.

As we’ve mentioned before, there were some Bears fans hoping the team would finish out of the playoffs so Smith would get fired. Of course, this attitude didn’t become prevalent until the Bears entered their annual late-season swoon.

Anyway, the Bears had some good years and even made it to the Super Bowl under Smith (first black coach to lose a Super Bowl!), but they made the playoffs just three times in his nine seasons. Further, Smith was 8-11 against the Green Bay Packers.

After winning seven of first of his 10 against Green Bay, the Bears dropped eight of the next nine.

So, while Smith’s 81-63 regular season record probably looks fine to most people, it isn’t fine for a place like Chicago. Three playoff appearances in nine seasons wouldn’t be fine in Green Bay either.

Still, this disparity of opinion is amusing. 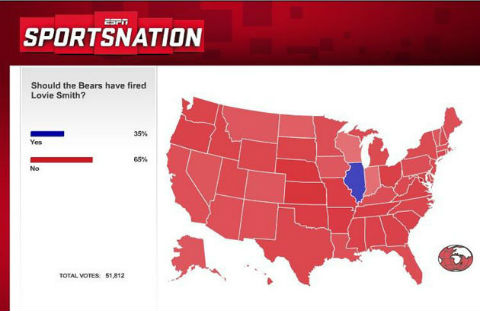